The Myth of Moral Justice: Why Our Legal System Fails to Do What's Right

Dostupnost
skladem
Vydavatel
Harper
ISBN
978-0060188160
EAN
KD42
Počet stran
368
Rok vydání
2004
Kniha skladem na prodejně v Trnavě. American culture is obsessed with the law, the legal system, and lawyers. Much in our everyday lives revolves around the law, and we are bombarded daily by cultural images of lawyers and the legal system at work. We indulge in dramatic television shows and feature films about lawyers, we read legal thrillers, and observe trials as they unfold. Many of us wish for our children to attend law school and become lawyers. At the same time, most people report that they don't trust lawyers and hold them and the legal system in very low esteem. Those who have had unfavorable experiences with the law have walked away bitter and resentful. Some have observed that lawyers operate according to their own professional worldview, one that is emotionally detached and unfeeling, overly logical, technical, narrow, bureaucratic, and insensitive to basic human emotions and moral principles. We are, paradoxically, both fascinated and repulsed by our legal system. The dramatic allure of judgment keeps us enthralled; the absence of moral conviction in the law makes us furious. In The Myth of Moral Justice, law professor and novelist Thane Rosenbaum suggests that this paradox stems from the fact that citizens and the courts are at odds when it comes to their definitions of justice. Individuals seek out lawyers and enter courtrooms because they have an emotional grievance as well as a legal complaint. They expect the law to do the right thing. Yet our legal system, bent on separating the legal from the emotional, willfully ignores basic moral criteria. As a result, the justice system undermines truth, perpetuates secrets and lies, prevents victims from telling their stories, promotes adversarial enmity over community repair, and fails to equate legal duty with moral responsibility. Legal outcomes that make sense to lawyers and judges feel simply wrong to most people and enrage others. With a lawyer's expertise and a novelist's sensibility, Rosenbaum tackles complicated philosophical questions about our longing for moral justice. He also takes a critical look at what our legal system does to the spirits of those who must come before the law, along with those who practice within it. Rosenbaum reinforces his themes with artistic representations of lawyers and legal systems from the classic works of Shakespeare, Charles Dickens, and Franz Kafka, along with various important feature films that illuminate why our legal system fails to do what's right. 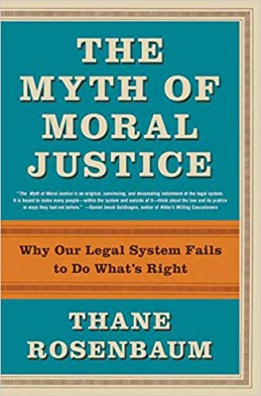