Dostupnost
skladem
Vydavatel
Oxford University Press
ISBN
978-01-9515-807-6
EAN
KD138
Počet stran
288
Rok vydání
2002
Kniha je skladem na prodejně v Trnavě. Millions of Americans were baffled and outraged by the U.S. Supreme Court's role in deciding the presidential election of 2000 with its controversial ruling in Bush v. Gore. The Court had held a unique place in our system of checks and balances, seen as the embodiment of fairness and principle precisely because it was perceived to be above the political fray. How could it now issue a decision that reeked of partisan politics, and send to the White House a candidate who may have actually lost the election? In Supreme Injustice, best-selling author and legal expert Alan M. Dershowitz addresses these questions head-on, at last demystifying Bush v. Gore for those who are still angered by the court's decision but unclear about its meaning. Dershowitz--himself a former Supreme Court clerk--argues that in this case for the first time, the court's majority let its desire for a particular partisan outcome have priority over legal principles. As in his other bestselling books, Dershowitz clarifies complex legal issues, explaining concepts such as "equal protection" and "irreparable harm." Digging deeply into their earlier writings and rulings, Dershowitz proves beyond a reasonable doubt that the justices who gave George W. Bush the presidency contradicted their previous positions to do so. The most egregious ruling since the Dred Scott Decision, Bush v. Gore has shattered the image of the Supreme Court as a fair and impartial arbiter of important national issues. The resulting loss of the American people's respect, Dershowitz concludes, has severely compromised the Court's role in national affairs. And yet Dershowitz sees some benefit emerging from this constitutional crisis--if we understand its lessons and take action to prevent it from happening again. 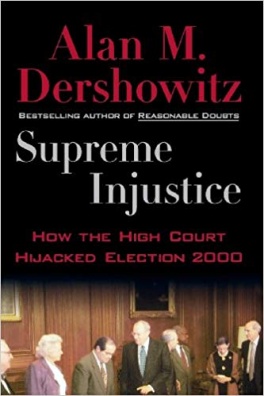