The Concept of Juristic Person

Dostupnost
skladem
Vydavatel
Wolters Kluwer ČR, a. s.
ISBN
978-80-7598-188-2
EAN
9788075981882
Počet stran
280
Rok vydání
2020
Formát
A5
It is not a man, and still can have rights and obligations. It is not a man, and still can engage in legal conduct. It is not a man, and still can be legally responsible. What is it? A juristic person. But how is it possible that “something” which does not naturally exist, “something” which cannot be perceived with one’s own senses, can have rights and obligations? How is it possible that “something” which—unlike a human being—cannot have its own reason and will, can engage in legal conduct? How is it possible that “something” which cannot have conscience and feel guilt—like a human being—can be legally responsible? And what is then such a legal creation—a juristic person—good for? This monograph, titled “The Concept of Juristic Person”, aims to answer all these questions, and thus explain this very concept. “In this insightful piece of scholarly work, Karel Beran presents his thoughts on the concept of juristic person. Following a historical introduction of the concept of person (roughly from the times of Roman law, through natural-law theorists of the early modern period, such as Pufendorf, to Savigny’s turning point) and interesting remarks about (the lack of) the general concept of person in common law, he starts with the concept of person as a “point of imputation” (derived from pure theory of law), where not only rights and obligations, but also reason and will, are imputed to a person. Then, two theories of juristic persons known mainly from German legal science—the theory of will (with its two “variants”: the fiction theory and the organic theory) and the interest theory—are analyzed, including many interesting insights and knowledgeable critique. The concept of legal personhood of a juristic person (understood not only as a rights-holding and obligations-holding capacity, but also as norm-creating competence) and its legal capacity (including the capacity to be legally responsible) are the subjects of the subsequent chapters, focusing, inter alia, also on contemporary philosophical theories of group agency. The final chapter, concluding the book, presents the defining elements of a juristic person. The author wrote an impressive and ambitious book that tries to present and explain all the main problems of the concept of juristic person. The book is not only a well-written survey of the most discussed issues related to this concept, but also an original elaboration of many of these issues (based on the author’s creative elaboration of pure theory of law—an approach quite uncommon today). In this sense, the book can be recommended not only to readers interested in private law or public law, but also to those concerned with general theory of law.” JUDr. Michal Šejvl, Ph.D. Institute of State and Law of the Academy of Sciences of the Czech Republic Faculty of Law, University of West Bohemia, Pilsen, Czech Republic “The reviewed monograph is significant for contemporary legal science. I am not aware of any similar work originating in the last twenty years, even though there are several new books dealing with personhood on the market now, such as Visa Kurki’s “The Theory of Legal Personhood”, Oxford University Press 2019. But those books examine other aspects of the problem of juristic persons. In contrast, Karel Beran’s book collects, and comments in an illuminating way on, various classical views of juristic persons, which form the actual basis for contemporary civil law regulations in different countries. Finally, I want to emphasise (although I am not a native-speaker and so I cannot evaluate the correctness of the author’s English) that the language of the book is comprehensible and transparent. The conceptual network is very well-founded in contemporary legal science. That is why this monograph should become renowned in the community of legal theorists in Europe.” Prof. UŁ dr hab. Sylwia Wojtczak Faculty of Law and Administration, University of Lodz, Poland 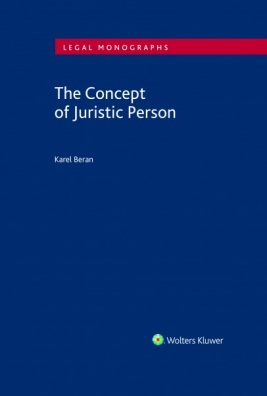