THE USE OF FORCE IN INTERNATIONAL RELATIONS

Dostupnost
skladem
Vydavatel
VEDA
Počet stran
312
Místo vydání
Bratislava
Rok vydání
2013
Formát
17x24 cm
ISBN
978-80-224-1341-1
EAN
9788022413411
This book is a translation of the original Slovak edition published in 2007. The commentaries from today (a 2012 perspective) are included in obvious italics in the footnotes.The main idea if the book is that violence is integral to the nature of human beings as a biological species. Human beings primarily tend to exercise collective violence (war, genocide), which is often glorified by culture. This collective violence has been long an efficient function of the selective evolution of human civilization. The nations that have been successful are only those, which were both able to live in peace and able to fight in the most brutal manner, if and when necessary. Military capacities and the ability to deploy them are the principal criterion of survival and the benchmark that states use to compare their respective power.As a result of the above, the use of force is and will be a permanent fixture of international relations, at least as a potential threat. The legal regulation of actual warlike activity is also an important issue for analysis. However, a fully-fledged regulation of the war violence is impossible because war is a serious matter and the stakes are very high. On the other hand there exist factors which moderate warlike enthusiasm and reduce the likelihood of an outbreak of war - the book describes also them. The final message of the book of Dr. Daniel Šmihula is that the phenomenon of violence, as the direct use of force or threat of force, is and will remain present in international relations. Each prosperous community and each nation needs to be able to live in peace and work at constructing its own prosperity and economic, technological and spiritual advancement. Simultaneosly, it must be capable of effectively waging war, if necessary. 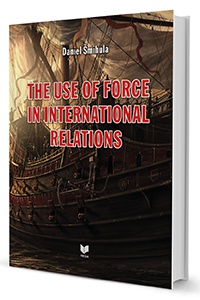