Dostupnost
skladem
Vydavatel
Karolinum
ISBN
978-80-2462-262-0
EAN
9788024622620
Počet stran
292
Místo vydání
Praha
Rok vydání
2013
Formát
A5
The Master of the Třeboň Altarpiece was one of the most important Gothic artists of the international style art in the European context. Scholarly literature, both Czech and foreign, presents various ideas concerning ascribing particular pieces of art to this unknown figure, the date of their origin and their chronology, artistic ideological points of departure of his work and the reconstruction and origin of the "Třeboň altarpiece." Art historian Jan Royt’s extensive scientific monograph on the Master of the Třeboň Altarpiece is an attempt to answer these questions. The introductory chapters outline the historical events and development of painting in Europe and in Bohemia in the last third of the 14th century, including the spiritual background of the time. The central part is devoted to the artistic and iconographic analysis of works of the Master of the Třeboň Altarpiece and works from his workshop and circle as well as importance in the formulation of the "beautiful style." The scholar focused also on the various hypothetical variants of the hypothetical reconstruction of the altarpiece (including drawings). The book closes with a detailed and critical overview of art historians’ views of the work of this medieval artist. The appendix, including illustrations, summarizing the results of restoration survey of the panel paintings by the Master of the Třeboň Altarpiece, is the work of Adam Pokorný. 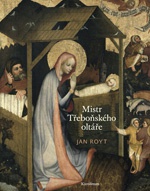