Dostupnost
skladem
Vydavatel
Karolinum
ISBN
978-80-246-4653-4
EAN
9788024646534
Počet stran
148
Rok vydání
2021
Famed Czech Avant-garde photographer Jan Lukas snapped an offhand portrait of twelve-year-old Vendulka Vogl in March 1943. A friend of the Vogls, Lukas was saying goodbye to the family, who were soon to leave Prague for a concentration camp. The photograph almost didn’t see the light of day—Lukas knew that if the Nazis found it on him, he could wind up in the camps as well—but the image was eventually developed and came to symbolize the Holocaust and humanize its victims. Seventy years after this famous picture was taken, investigative journalist Ondřej Kundra discovered that, despite all odds, Vendulka Vogl had survived the camps of Terezín, Auschwitz, and Christianstadt, and was in fact still alive and living in the United States. Kundra persuaded her to tell the remarkable story surrounding the photograph: her survival, her later decision to flee the Communist regime for America, and how she later reconnected with Jan Lukas, maintaining a lifelong friendship. Vogl’s thrillingly moving story, Kundra’s sharp and engaging writing, and Lukas’s striking photography all combine to make Vendulka an inspiring investigation into the horrors of totalitarianism and the redemptive beauty of friendship. 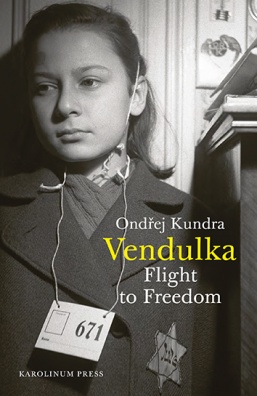